In recent years, there has been significant growth in Pukekohe and surrounding communities. More housing, employment and families means more people moving around on the road.

AT proposes to install new traffic signals at : 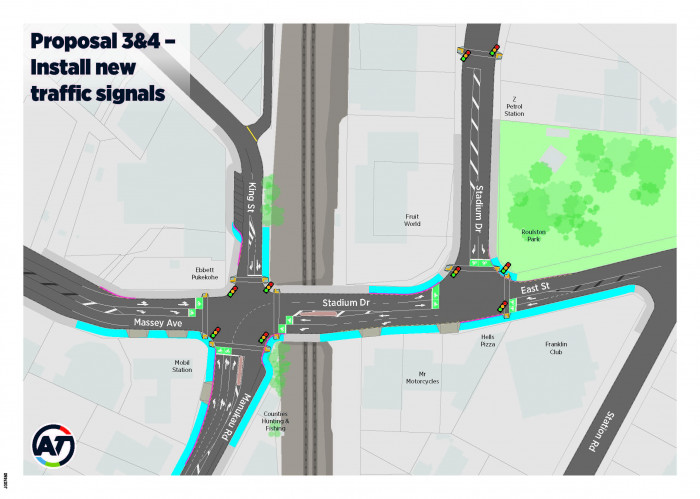 We know these roads are used by local traffic, heavy trucks, tractors, and people driving in from Tuakau, Bombay, and further away. There are safety issues, a lack of pedestrian crossings, and increasing congestion.

We are also aware of the large numbers of people walking along these roads to get to the bus and train stations, schools, and through the town centre.

Evaluating these intersections as one connected piece of the road network is essential. The intersections are only 80m apart, which means that how one performs affects the performance of the other.

The traffic signals are not a stand-alone project, but part of the 10-year development strategy plan for the Pukekohe Town Centre, in partnership with Eke Panuku, the Franklin Local Board, Auckland Council, and mana whenua.

Swedish-style raised tables would be implemented on each leg of the intersection, erect new road signage, remark the road, and change the kerbs to show where people can cross the road safely.

The roundabout would remain and there would be no changes to parking on the street.

Swedish-style speed tables are raised tables with only one sharp ramp, which creates a smoother ride for heavy vehicles, buses, and tractors. This type of table is more appropriate for a business area than a typical speed table used on residential streets.

Feedback on the proposed upgrades is open until 31st August.

For the full proposal and feedback form, please click here